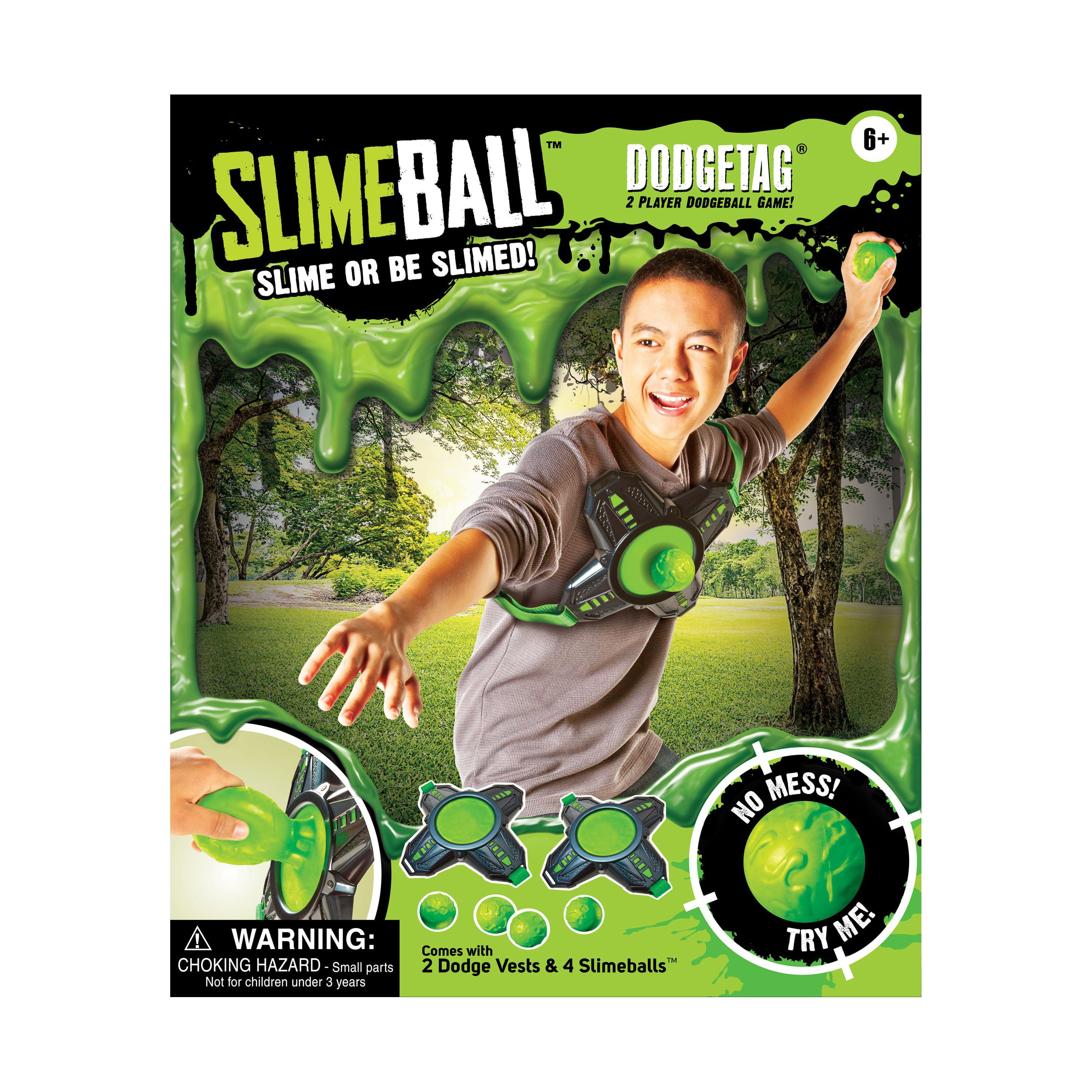 A slime-themed twist on the classic game of dodgeball, using slime balls and vests. This great fun twist on dodgeball has you throwing slime balls with perfect aim. Players simply throw the soft slime balls at their opponent's sticky vests, trying to hit them in the bright green target. Slimeball Dodgetag is the ultimate 2-player DodgeBall game! Kids will be dodging slimeballs in no time. The slime dodge balls stick to our materials but won't stick to anything else nor leave any marks. Each player wears a slime vest with a sticky target and picks 2 squishy tag balls. Bump, set, and spike the ball in Slime Volley! You are challenged to compete in one-on-one volleyball. Outsmart your opponent to land the ball on their side of the court. Play against virtual opponents, friends, and gamers across the planet! 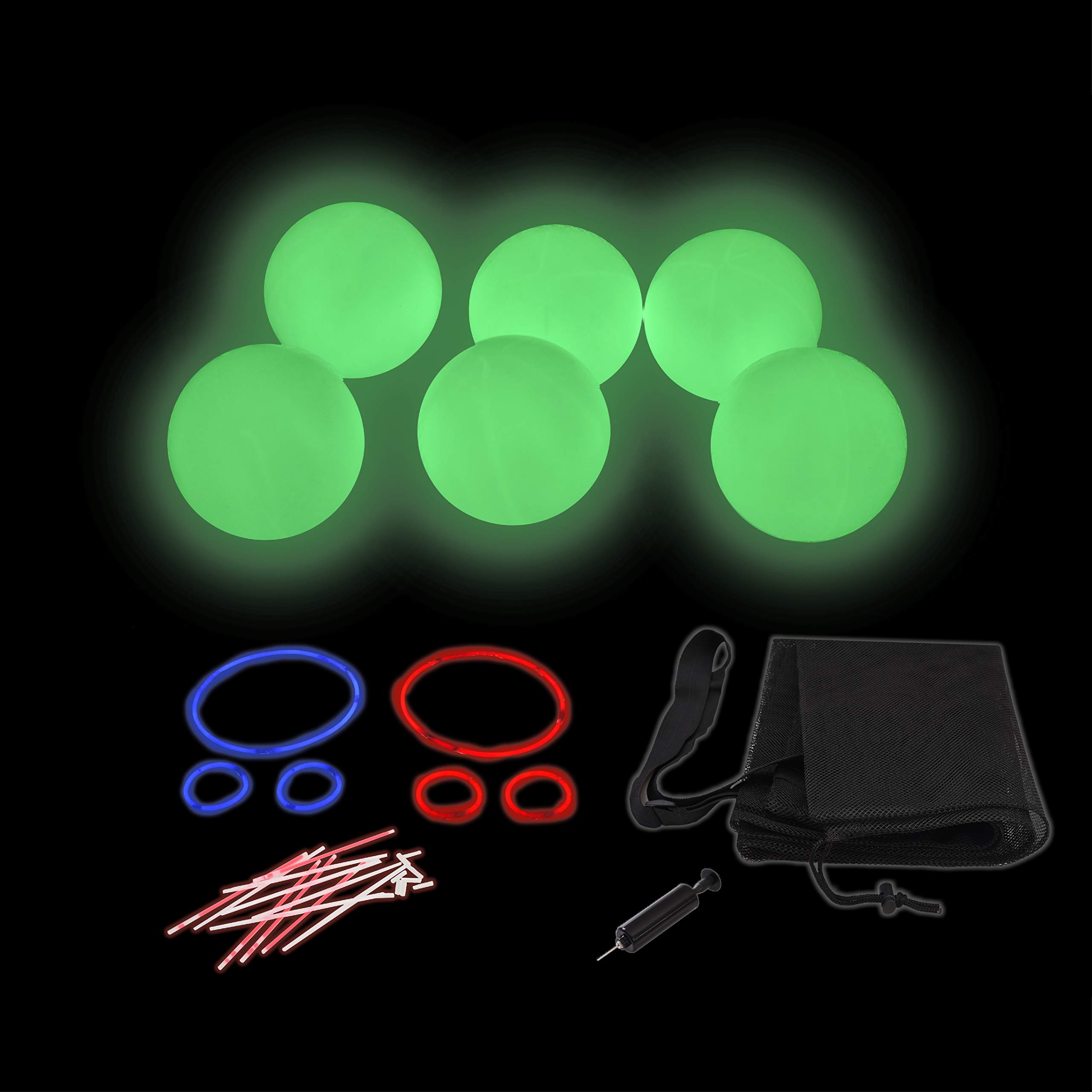 I am decades removed from Nickelodeon's target demographic, and watching the network's first NFL playoff game Sunday afternoon necessitated a suspension of all snark and sarcasm, but you are about to read words I never imagined typing: The Nick broadcast was a hell of a lot of fun, maybe the best experience I've had watching a game this season.

There were so many references I didn't get. The Saints played the Bears, and we were told Alvin Kamara, who was compared to Alvin of Chipmunk fame for some reason, loves scoring touchdowns as much as someone I've never heard of loves orange soda. I had, and have, no idea why players' heads would occasionally be topped with a giant hamburger. And at one point in the second quarter, something reminded someone of what would happen if Ned Bigby and Billy Loomer got into a weightlifting contest. Again, no clue.

There were a lot of mentions of studying and homework and tests, but the moment I knew I was all-in was when Nate Burleson described Drew Brees by saying, 'He's the kid at recess who never misses at dodgeball,' which we can all agree is a level of perfection rarely reached even by non-Nick analysts.

Yes, the gimmick was a four-hour commercial for the network, but every other broadcast is a four-hour commercial for the NFL, so that's a wash. Burleson was a delightful companion, good in a born-for-this way, and if the NFL has plans to continue this type of youth outreach, he should get every assignment. The idea was to introduce and explain the game to kids who might not otherwise watch, and Burleson said things such as, 'When a flag is on the ground, usually someone messed up' and, 'The nose of the ball touched the ground like a dog smelling something' and, 'A trick play is the closest the NFL has to a prank.' A trip down the field? 'Gaining 10 yards is like little homework assignments,' he said. 'The red zone is like the test, and if you can get into the end zone and get your six points, that's when you ace the test.' It was Mister Rogers meets John Madden.

Penalties were explained by Young Sheldon (again, never seen it) who informed us that a false start -- a particular specialty of the Bears on Sunday -- 'is like when my dad starts shoveling in dinner before Mom says grace.' Play-by-play man Noah Eagle, a 45-year-old voice emanating from a 24-year-old body, told me on Thursday that he planned on 'getting the basics in there' but always keeping in mind that he's speaking to 'an 11-year-old who maybe hasn't tried football before.' To that end, we can all share in Eagle's disappointment in the players' pedestrian choices for favorite ice cream (a whole lot of chocolate and vanilla).

(Sadly, the Nick broadcast presented no respite from the State Farm commercials. It might be tough love, but it's never too early for kids to learn a harsh truth: There is no Rodgers Rate.)

Sure, they missed stuff. When Taysom Hill struggled to get up after a big hit, Burleson's early reaction was to brush it off as the equivalent of scraping your knee at recess -- 'You get banged up, you get back up and you go out there and play another down.' And it would have been nice to see a replay of what precipitated an unsportsmanlike conduct call against Bears tight end -- and vociferous objector -- Cole Kmet. Cordarrelle Patterson let out a very audible F-bomb after he was called for a penalty on a punt return. What will we tell the children? Nothing, apparently. And I still have no idea why Bears receiver Anthony Miller was ejected from the game, but I do know more about cartoon slime than I did when the day began, and I know that Saints coach Sean Payton said he would be happy to be slimed if he won, and then was after he did.

(Nickelodeon-age me, a being that existed before Nickelodeon, was calling into sports-talk radio and proposing trades -- 'Reggie Jackson for Jackie Hernandez, who says no?' -- so maybe this was the broadcast I never knew I needed. I'm thinking demographically targeted broadcasts are the way of the future -- an old-folks version will feature nonstop complaints about celebrations and a play-by-play guy muttering, 'Act like you've been there,' before kicking it down to a sideline reporter who reminds everybody that players used to go both ways back in the day.)

There were several replay reviews, some of them controversial, but not for one minute did I wish there was a rules expert on hand to tell me what I just saw. It took nearly an entire half of play before any mention of an offensive or defensive coordinator, and it happened only because the camera happened to catch Bears defensive coordinator Chuck Pagano on the sideline. Not once were we informed that a great play by a defensive end or a wide receiver was actually attributable to a coordinator 'dialing up a blitz' or 'calling the perfect play at the perfect time.' My one regret: I think I speak for an entire Nick-watching nation in wishing we had been presented with a Nickified version of the Manti Te'o story, especially since it could have been packaged as a PSA. I get it, but still. For the sake of the country and all.

Gabrielle Nevaeh Green, a 15-year-old Nick star who was a complete mystery to me before Sunday, worked the booth with Burleson and Eagle. At one point, she blurted out, 'Ooh, I love the kicking,' which immediately put her at odds with the analytics crowd. She didn't seem to care. She asked Burleson, 'What's it feel like to be tackled?' which is a wonderful question, one that Joe Buck might ponder but would never consider asking. 'Getting tackled feels like falling down wooden stairs combined with hitting your shin on the bed,' Burleson answered, and I waited in vain the rest of the broadcast for Green to ask, 'Why is every punt returner named Harris?'

Unsurprisingly, it turned into a terrible game, so it was nice to hang out in a place where nobody seemed to care. There was very little in the way of strategic dissection; There was no speculation on whether Bears coach Matt Nagy would be fired or which coordinators are under consideration for what jobs. Burleson delved into the X's and O's a little bit when the Bears ran an anti-two-minute drill at the end of the half, but he apologized before he did it. And that was sort of the lesson of the day: No matter how refreshing it might have been, the Nickelodeon broadcast couldn't avoid the reality of the Chicago Bears (the kids might as well learn early). To Nickify things: The Bears played as if they petitioned to take an AP class and then decided not to study.