Trados GmbH was founded as a language-service provider (LSP) in 1984 by Jochen Hummel and Iko Knyphausen in Stuttgart, Germany.[4]The company began developing translation software in the late 1980s, and released the first Windows versions of two of the suite's major components in the early 1990s – MultiTerm in 1992, and Translator's Workbench in 1994. In 1997, the company received a major boost when Microsoft decided to use Trados for its internal localization needs.[4]

SDL Trados Studio is delivered with several tools and applications. These are:

Handling of translation memories and glossaries[edit]

The translation memory (TM) format of SDL Trados Studio is SDLTM, which consists in a particular SQLite database.[7] 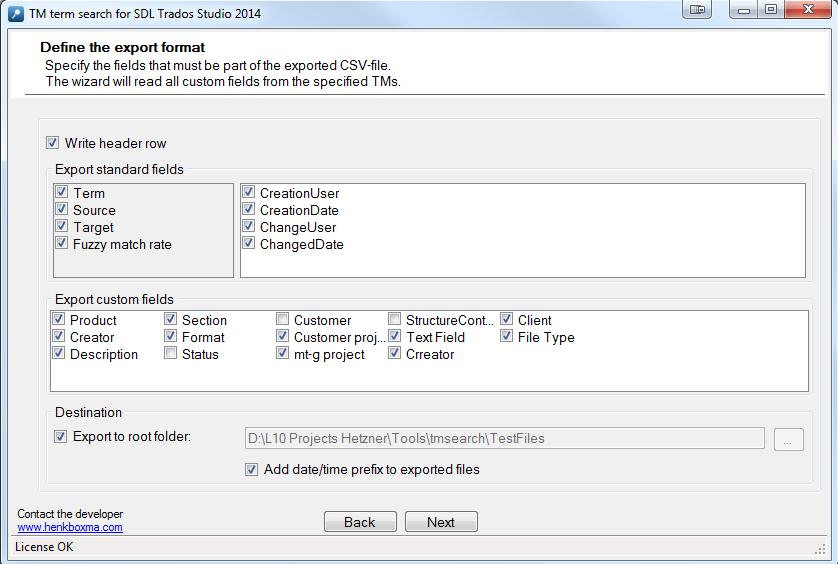 SDL Trados Studio can also work with server-based translation memories by connecting to SDL Trados GroupShare. It can also connect to other Translation Providers created through the API by any developer, many examples of these can be found on the SDL AppStore.

Glossaries are handled by the MultiTerm application. Glossaries can be bilingual or multi-lingual, file-based or Server based.

Integration of machine translation and postediting[edit]

In December 2010 SDL launched the SDL OpenExchange, now known as SDL AppStore, a web portal allowing independent developers to leverage the software's open architecture to create applications and plug-ins for SDL Trados Studio. Apps can be downloaded to add functionality missing from the base product, such as legacy file support and new machine translation plugins. As of the end of August 2017 there has been over a million downloads of apps from the store.

Today the SDL AppStore supports the needs of users through the ability to download and install additional functionality that often addresses niche requirements that cannot be solved in any translation tool. It also supports the needs of developers who use the APIs that are freely available for the products to integrate and add new features that support their own business needs.[8]

The SDL team supporting the SDL AppStore also maintain a github site where they provide opensource code using the APIs for many of the apps they have created on the SDL AppStore. This provides a very useful resource for developers looking for additional examples of how to use the APIs in practice.[9]

According to a 2004 survey by the World Bank, Trados held an estimated 75% global market share with SDL holding an additional 10%.[2] 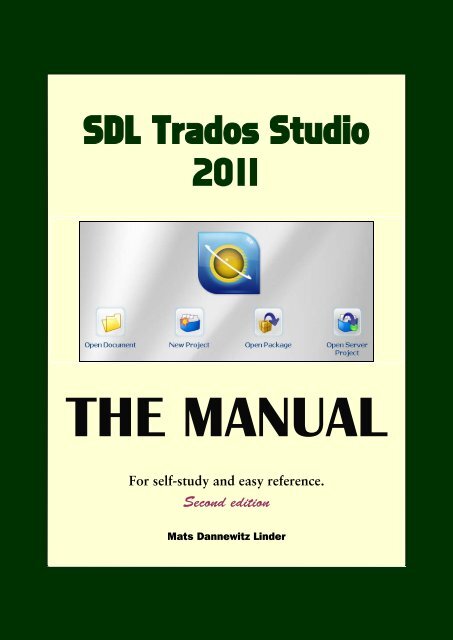 A number of solutions have been created for handling the different versions of Trados file formats.[12] SDL did apparently respond to user complaints of licensing complexity and problems by simplifying the licensing scheme used in the SDL Trados Studio 2011 Freelance release.[13] Successive versions of SDL Trados Studio have resolved the backward compatibility issues.

Here are some readers’ opinions on the book. Feel free to add your own.

■ In sum, I loved this book. Not only is the manual incredibly comprehensive, but Mats writes in a very clear, easy-to-understand style that should help almost every user learn or master Studio. ‑ ‑ ‑ Congratulations and thanks to Mats Linder for such a valuable resource! – Corinne McKay, author of How to Succeed as a Freelance Translator, in her blog Thoughts on Translation.

■ A worthy member of the “Bible” collection – if it were published by O’Reilly or some other of the huge players 😉 So it’s “only” a very handy companion for Studio that is updated more than frequently ‑ ‑ ‑ Thanks for a great tool for the price of almost nothing! – Angela Meissner

■ I could not survive Studio 2014 without your manual! – Diane Van Hoof

■ You can virtually become an expert at using Studio 2011 without opening the program! – Christos Floros, in the blog Adventures in Freelance Translation

■ Excellent. It tells not only what and how to do, but also when to do something. After having studied it thoroughly: – I really discovered unnoticed valuable functionalities (e.g. the “pseudo-translation” procedure); – I got my SDL Certification Really a very useful handbook. – Radu Nicolaescu

■ The new edition of SDL Trados Studio 2011 Manual is more of the same: ie, crystal clear, precise and detailed instructions about a piece of software that many of us use on a daily basis. ‑ ‑ ‑ Let’s hope that Mats continue publishing updates to his manual, I have become dependant on it! – Alejandro Moreno-Ramos

■ I can honestly recommend everyone using Trados Studio to get this manual, it is an excellent handbook “for self-study and for reference”, as the author says. It covers everything from differences between the old Trados versions, to setup, the basics and more advanced tips and tricks. Everything is illustrated with clear screen dumps. You can sit down in your favorite reading chair and read through the whole manual, without having to refer to the actual software, or use the manual as a reference or help during your translation work with Studio. – Tess Whitty, in her blog The Business of Translation

■ This manual is the kind of book I had searched for months. In the week I have had it, I have learnt how to use dozens of Studio functions that were totally unkown for me. Now I feel that I am finally taking the most out of Studio 2011. ‑ ‑ ‑ I know for sure that I would have never discovered many of the functions without this manual. – Alejandro Moreno-Ramos, author of MOX. Illustrated Guide to Freelance Translation

■ Since transitioning to Studio 2011 earlier this year I have been looking for something like this manual. It has already helped me with clear descriptions and helpful hints to save time and speed up the learning curve! Well written with the translator in mind. – Frieda Ruppaner-Lind

■ I found it particularly helpful that Mats does not confine his manual to the main Trados application, but he points his readers to a good number of plug-ins from SDL’s Open­Exchange program as well as other third-party products that can be useful in combination with Trados. ‑ ‑ ‑ Overall he is very positive and encouraging and manages to communicate both to a novice as well as a more advanced user. For instance, I learned some details of joining and splitting files and different fuzziness settings that I was not aware of. – Jost Zetzsche, editor of The Tool Box Newsletter

■ Trados Studio 2011 is my main working tool, and I always wished there was a book that contained every little detail on every functionality the tool offered. With this excellent, easy-to read PDF manual, my wish has finally come true. ‑ ‑ ‑ Even if you think that you already know it all, it is definitely worth buying the manual and reading it. You’ll find out that Studio can do much more to help you become a better, more efficient translator. – Pavel Janousek

■ The discovery of this manual has made me feel like I’ve got a treasure. – Junichi Hiratsuka