Shakespeare - Romeo and Juliet In the Italian city of Verona, two families hate each other. Romeo is from the Montague family and Juliet is a Capulet, but they fall in love at first sight. This is their tragic love story. What must be shall be. To answer that, I should confess to you. I will confess to you that I love him. If I do so, it will be of more price, Being spoke behind your back, than to your face. The tears have got small victory by that; For it was bad enough before their spite.

Romeo makes his first appearance a few moments after the Prince has ended a fight between Montagues and Capulets. These lines establish that Romeo is tired of the feud between the two families. He compares the families’ hatred to his own love for Rosaline, which establishes the close connection between love and violence running throughout the play.

I fear too early, for my mind misgives;
Some consequence, yet hanging in the stars,
Shall bitterly begin. (I.iv)

Romeo agrees to attend the Capulets’ ball, but he fears his decision may set off a chain of events that will end in tragedy. Throughout the play we get a strong sense that Romeo and Juliet cannot escape their fates. When Romeo says that the consequences of his decision are “hanging in the stars,” he reminds the audience that the “star-crossed” lovers of the Prologue are doomed to die.

O she doth teach the torches to burn bright.
It seems she hangs upon the cheek of night
As a rich jewel in an Ethiope’s ear. (I.v.)

These lines express Romeo’s first impression of Juliet. In discussing his love for Rosaline, Romeo uses stale clichés drawn from the Petrarchan love poetry that was popular in Shakespeare’s day. As soon as he sees Juliet, Romeo’s language takes on a striking and original quality, which suggests that his passion for her is authentic.

But soft, what light through yonder window breaks?
It is the east, and Juliet is the sun. (II.ii.)

As Romeo approaches Juliet’s bedroom, he describes her in language drawn from astrology, such as suns, moons, and stars. This grandiose imagery suggests that Romeo believes his love for Juliet is not earthbound, but transcendent. Juliet herself is a force as powerful as the sun, the literal center of the universe. However, astrological imagery also reminds the audience that Romeo and Juliet are “star-crossed”—in other words, fated to die. The following lines read “arise, fair sun, and kill the envious moon,” suggesting that Romeo’s love for Juliet has supplanted his previous, weaker infatuation with Rosaline. 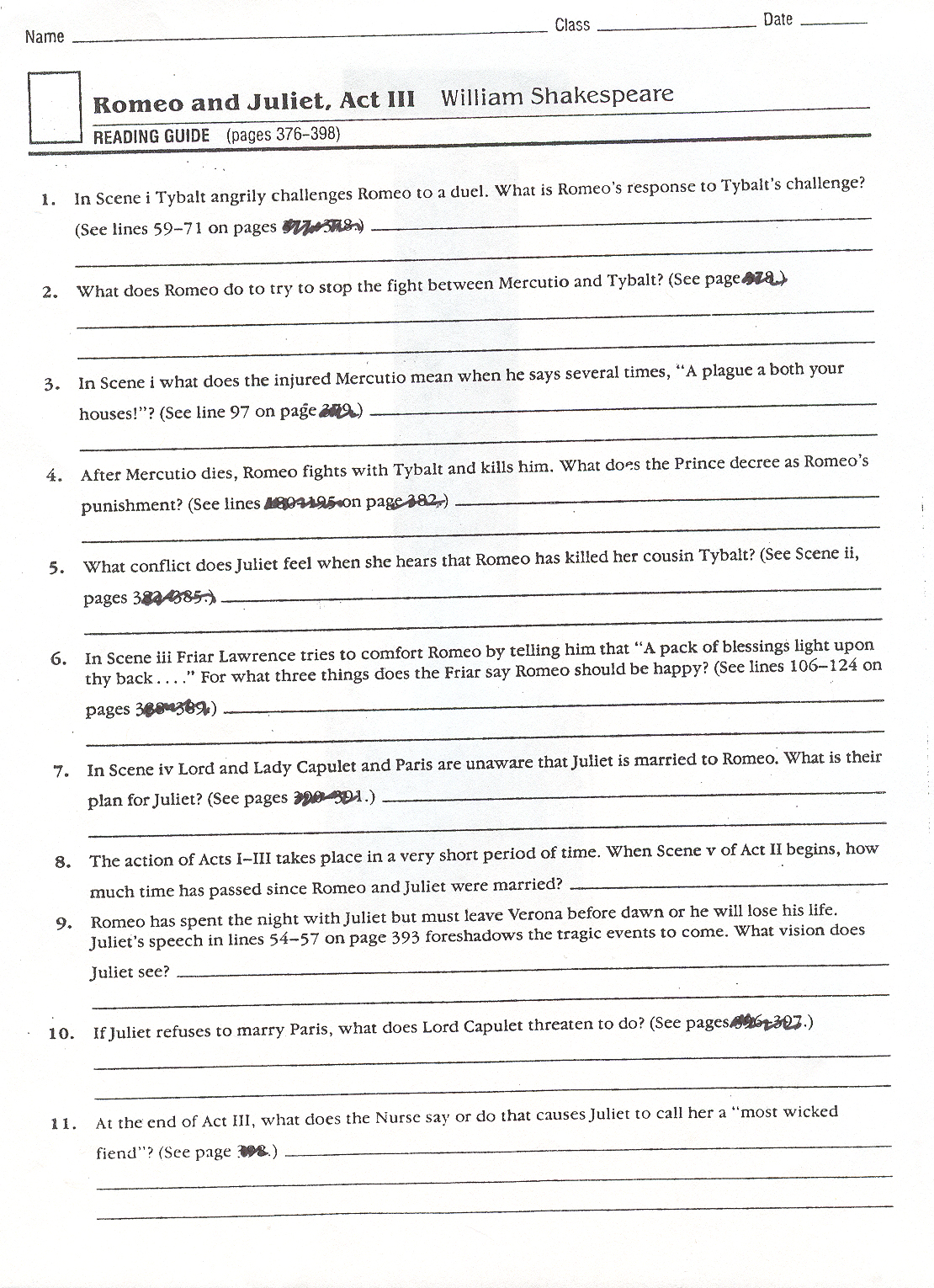 With love’s light wings did I o’erperch these walls,
For stony limits cannot hold love out. (II.ii.)

Juliet asks Romeo how he has managed to reach her bedroom, and this is his reply. These lines show that for Romeo, love is freedom. As a lover, he can ignore the boundaries set by the feud between Montagues and Capulets. Yet Romeo’s words also suggest that he retains a primarily abstract and poetic understanding of love, more fantasy than reality.

O sweet Juliet
Thy beauty hath made me effeminate
And in my temper softened valor’s steel! (III.i.)

When Tybalt kills Mercutio, Romeo regrets not fighting Tybalt himself. This is a turning point in Romeo’s story. Up until now, Romeo has been trying to free himself from the feud between Montagues and Capulets as well as the masculine code of honor that keeps the feud going. When he blames Juliet for making him “effeminate,” he is embracing the masculine code once more.

This line is the first moment in the play when it seems Romeo and Juliet might have a chance to talk about something besides their love for one another. However, the chance never comes, because Romeo has to escape from Verona. This moment emphasizes that Romeo and Juliet’s love is new and immature. Part of the play’s tragedy is that the lovers will never have the chance to have an adult relationship.

Romeo refuses to accept Juliet’s death. He decides to return to Verona, but his attempt to defy the “stars” only succeeds in bringing about his tragic fate, which emphasizes that the lovers’ destiny is inescapable. Because the Prologue references the lovers’ “star-crossed” fate, every subsequent reference to the stars, or to the heavens in general, reminds the audience of the sad fate awaiting the lovers, and their inability to avoid it, try though they might.

Romeo and Juliet, Shakespeare's most famous tragedy and one of the world's most enduring love stories, derives its plot from several sixteenth century sources. Shakespeare's primary inspiration for the play was Arthur Brooke's Tragical History of Romeus and Juliet (1562), a long and dense poem. Brooke's poem, in turn, was based on a French prose version written by Pierre Boiastuau (1559), which was derived from an Italian version written by Bandello in 1554. Bandello's poem, meanwhile, was an interpretation of Luigi da Porto's 1525 version of a story by Masuccio Salernitano (1476).

The plot of Shakespeare's Romeo and Juliet remains mostly true to Brooke's poem, though Shakespeare exercised artistic license in several instances. For example, as he often does, Shakespeare telescopes the events from Brooke's poem (which took place over 90 days) into a few days in the play. Additionally, Shakespeare's Juliet is thirteen, while Brooke wrote her as sixteen. The time compression and the younger Juliet enhance the youthful nature of the central relationship, emphasizing its passion and newness.

One of the most powerful aspects of Romeo and Juliet is Shakespeare's use of language. The characters curse, vow oaths, banish each other, and, in general, demonstrate great verbal dexterity through an overuse of action verbs. In addition, the play is saturated with oxymorons, puns, paradoxes, and double entendres. Shakespeare even calls the use of names into question, most famously in Juliet's balcony soliloquy. Shakespeare also executed a rather strong shift in the language spoken by both Romeo and Juliet after they fall in love. Whereas Romeo is hopelessly normal in his courtship before meeting Juliet, after he falls in love, his language becomes infinitely richer and stronger.

Romeo and Juliet also deals with the issue of authoritarian law and order. Many of Shakespeare's plays feature characters that represent the unalterable force of the law, such as the Duke in The Comedy of Errors and Prince Escalus in Romeo and Juliet. In this play, the law attempts to stop the civil disorder, and even banishes Romeo at the midpoint. However, as in The Comedy of Errors, the law is eventually overpowered by the forces of love.

There are several different sources that inform the contemporary text of Romeo and Juliet. Romeo and Juliet was first published in quarto in 1597, and republished in a new edition only two years later. The second copy was used to created yet a third quarto in 1609, from which both the 1623 Quarto and First Folio are derived. The first quarto is generally considered a bad quarto, or an illicit copy created from the recollections of several actors rather than from the writer's original material. The second quarto seems to be taken from Shakespeare's rough draft, and thus has some inconsistent speech and some lines which Shakespeare apparently meant to eliminate. Please see the 'About Shakespearian Theater' section of this note for more guidance as to these concepts.

Romeo and Juliet was popular during Shakespeare's time, but over the centuries it has become nothing short of omnipresent. It is arguably the most-filmed play of all time, and has been adapted 4 times to date - first by George Cukor in 1936, then by Franco Zeffirelli in 1968, Baz Luhrmann in 1996, and most recently, by Carlo Carlei in 2013. John Madden's Academy-Award winning film Shakespeare in Love is a fictional account of Shakespeare's life while writing the play. It was the basis for Prokofiev's famous ballet, and has inspired numerous Operas, pop and jazz songs, books, games, and musicals.