Hades is Zeus' brother and ruler of the underworld and the dead. He was also called Pluto - God of Wealth, because the precious metals buried deep in earth were in his realm. The name Pluto was used by both the Greeks and the Romans, and it translated into Latin as Dis - 'rich.' Although he was an Olympian he spent most of the time in his dark castle in the underworld. Because of his dark personality he was not especially liked by neither the gods nor the mortals, he was not however, an evil god, he was stern, unpitying and inexorable, but just. Hades ruled the underworld and therefore most often associated with death and feared by men, but he was not Death itself, the actual embodiment of Death was another god - Thanatos.

Hades is always represented as a stern, dark, bearded man, with tightly closed lips, a crown on his head, a scepter and a key in hand, to show how carefully he guards those who enter his domains, and how vain are their hopes to escape. No temples were dedicated to him and his statues are very rare. Black animals were sacrificed to him and it is believed that at one time even human sacrifices were offered. Every hundred years festivals were held in his honor - The Secular Games.

Hades wife, and queen of the underworld, was Persephone daughter of Zeus and Demeter. Persephone did not marry Hades willingly, but was abducted by him, because she ate a pomegranate seed while she was in the underworld even Zeus was powerless to get her out of there when Demeter told him what had happened. Eventually a deal was worked out, Persephone would spend half the year with her mother and the other half with Hades in the underworld. The Greeks believed that while Persephone was with Hades her mother, Demeter, missed her so much that she withdrew her gifts from the world and winter came.

Hades' weapon was a two-pronged fork, which he used to shatter anything that was in his way or not to his liking, much like Poseidon did with his trident. His identifying possessions were the famed helmet, given to him by the Cyclopes, which made anyone who wore it, invisible and his dark chariot drawn by four coal-black steeds, always an impressive site.

Hestia is the daughter of Cronus and Rhea and the sister of Zeus. She is the goddess of fire, particularly the hearth, the symbol of the house around which a new born child is carried before it is received into the family. She is one of the three virgin goddesses, although both Apollo and Poseidon wooed her at one or another. Her temples were circular and served by virgin priestesses who dedicated their lives to her. Each city also had a public hearth sacred to Hestia, where the fire was never allowed to go out. Although she was rarely depicted in art, and played almost no part in myths, she was held in high honor, by both the Greeks and the Romans.

Hermes, Greek god, son of Zeus and the Pleiad Maia; often identified with the Roman Mercury and with Casmilus or Cadmilus, one of the Cabeiri. His name is probably derived from herma (see herm), the Greek word for a heap of stones, such as was used in the country to indicate boundaries or as a landmark.

The Roman worship of Vesta, their name for Hestia, was more elaborate. They believed that her cult was first brought into their country, Latinum, by Aeneas. One of the early kings of Rome, Numa Pompilius, built a temple in her honor, where the famous Palladium of Troy was preserved, brought there by Aeneas and believed to be an image of Athena or a shield that 'has fallen out of the heaven.' The welfare of the whole city was believed to depend on the preservation of the sacred flame kept in the temple and attended be priestesses called the Vestal Virgins. First there were four Vestal Virgins, later six; they were under the control of Pontifex Maximus, the head of the priestly college which directed the religious affairs in Rome. When there was a vacancy he was the one who elected a new Vestal. The candidate had to be between six and ten years old, perfect in mind and body, and of Italian birth. The training took ten years, another ten were spent in carrying out the sacred duties, and finally, ten more in training the instructing novices. At the age of forty, the Vestal was free to return to the outside world and even take a husband if she wished. The cult of Vesta was observed in Rome until the year 380, when the sacred fire was quenched and the priestesses dispersed by Byzantine Emperor Theodosius.

Hermes was the son of Zeus and Maia, daughter of Atlas; born in a cave on mount Cyllene in Arcadia. Hermes appears more often in the myths than any other god or goddess. He is the fastest of the gods, and his position was as Zeus' messenger. He was also the shrewdest and most cunning of all the gods, he was the Master Thief, who started his carrier before his was one day old, by stealing Apollo's herds. Zeus made him give them back, and Hermes won Apollo's forgiveness by given him the lyre which he made out of a tortoise shell.

To the people Hermes was the God of Commerce and the Market, patron of traders, merchants and thieves. In odd contrast he was also the Divine Herald, the solemn guide of the dead who leads their souls down to the underworld, after Thanatos did his job.

Because of a famous statue, Hermes' appearance is well known and he is easily recognized in art. He always wore his winged sandals and his winged cap (petassos); Caduceus, a magic wand given to him by Apollo was always with him as well. He invented quite a few things, some of which are: the lyre, the pipes, the musical scale, astronomy, weights and measures, boxing, gymnastics and the care of olive trees.

Archaic artists portrayed Hermes as a mature bearded man. However, later on, he was represented as an athletically built nude youth, immediately recognizable by four attributes: a broad-brimmed hat (petasos), winged sandals (talaria), a purse, and a herald’s wand (kerykeion, or caduceus in Latin). Hermes’ wand – a short-winged staff, entangled by two identical serpents – had magical powers, bringing sleep upon people or rousing them from it. It is very similar and frequently confused with the Rod of Asclepius, which is why Hermes’ wand is often incorrectly used as a symbol of medicine.

According to some myths, Hermes wasn’t only a messenger of the gods, but also the inventor of speech. As such, he is often associated with oratory or interpretation. In Greece, an interpreter was called hermeneus, and today the science of interpretation is known as hermeneutics.

Hermes was the only Olympian capable of crossing the boundary between the living and the dead and carrying the souls of the dead in Hades. In time, he came to be known as “the conductor” or “the leader of souls.” People also called him “patron of travelers and thieves,” “shepherd of men,” “trickster,” and “Argus-slayer.”

Hermes was the son of Zeus and Maia, the oldest of the seven Pleiades. He was born in a cave in Mount Cyllene in Arcadia at dawn. By noon he was able to invent the lyre and play a hymn celebrating his own birth on it. That very same evening, for reasons unknown, he stole the cattle of Apollo. Afterward, he came back and innocently tucked himself up in his cradle.

To invent the lyre, Hermes killed a tortoise and scooped the flesh out of its shell. Then, honoring the Pleiades, he stretched seven strings of sheep-gut over the empty shell. Once he found out who had stolen his cattle, Apollo was so angry at Hermes that bad things might have happened if Hermes hadn’t appeased Apollo with a lyre- accompanied song. In exchange for it, Apollo forgave his little brother everything and swore to be his closest friend forevermore. Some say that as a token of this promise, Apollo gifted Hermes with the latter one’s most emblematic object: the caduceus.

Hermes, a Darling of the Gods

By all accounts, Hermes was a darling of the gods. Artemis supposedly taught him how to hunt and Pan how to play the pipes. He was the one who guided Persephone back to her mother, Demeter. Above all, Hermes was very close with his father, acting in many of his affairs as Zeus’ wingman. Most famously, he beheaded the hundred-eyed giant Argus Panoptes, previously sent by Hera to closely watch over Zeus’ love interest Io.

In his role as a messenger, Hermes is present in numerous other myths. He escorts Pandora to Epimetheus, leads Perseus to the Graeae, and guides Priam safely to Achilles’ tent. In addition, he showed Athena, Aphrodite, and Hera the way to Mount Ida where Paris was supposed to judge which one of them was the fairest. 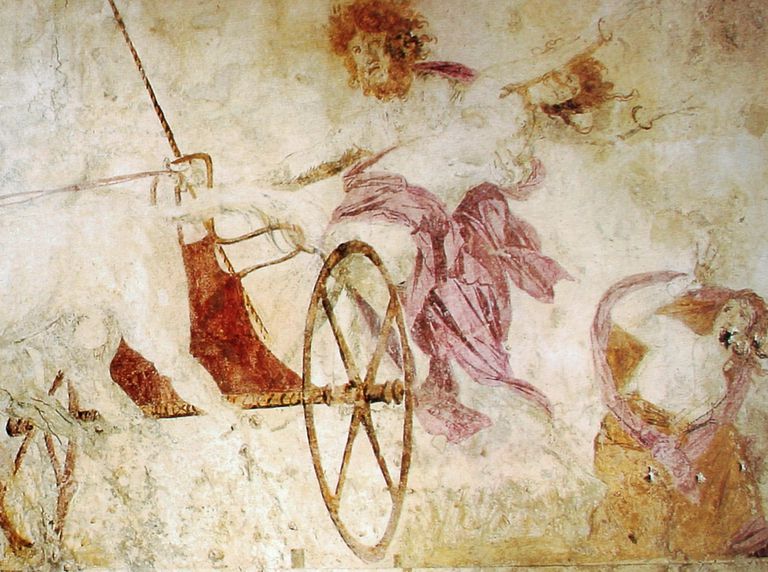 Even though associated with fertility, it seems that Hermes never married, and had relatively few famous consorts and children. Aphrodite bore him Hermaphrodites and possibly Tyche, Herse – Cephalus, and the nymph Dryope – Pan. Later poets sometimes link Hermes with Peitho or Hecate.

Once, Hermes and Apollo fell in love simultaneously with the virgin Chione and slept with her on the very same day. Later, Chione gave birth to twins. Philammon took after Apollo and became a famous musician. Unsurprisingly, Hermes’ son Autolycus became a trickster and a thief. Poets say that not few of his traits were inherited by his grandson: Odysseus.

Myth Of Hermes The God

The 4th Homeric Hymn is dedicated solely to Hermes and retells his childhood in length. In Lucian’s “Dialogues of the Gods,” there are few imagined interchanges between Hermes and other gods (3, 14, 15, 21, 24) which, now that you know Hermes better, will certainly make you laugh. A brief preview: in the 24th Dialogue, Hermes amusingly complains to his mother about the amount of work he has on his plate on a daily basis.

Hermes is the winged herald and messenger of the Olympian gods. In addition, he is also a divine trickster, and the god of roads, flocks, commerce, and thieves.

What did Hermes rule over?

Hermes ruled over the Herds, the Trade, the Thievery, the Roads, the Souls of the Dead, the Messengers, the Oratory, the Interpretation, the Persuasion, the Speech and the Athletics.

Where did Hermes live?

Who were the parents of Hermes?

The parent of Hermes was Zeus.

Who were brothers and sisters of Hermes?

Who were the consorts of Hermes?

How many children did Hermes have?

Which were the symbols of Hermes?

Hermes' symbols were the Talaria (winged sandals), the Petasos (winged helmet), the Caduceus (a short staff entwined by two snakes), the satchel and the lyre.

Which were the sacred animals of Hermes?

Hermes' sacred animals were the snake, the rooster, the tortoise, the ram and the hawk.

Which were the sacred plants of Hermes?

Hermes' sacred plants were the Crocus and the Strawberry-tree.