“Are there any books or films about graffiti and street art that you could recommend?” This is a question that often comes up. There’s a catalogue of sources, in fact, which each Graff Tour guide-in-training must study to earn their “badge.” It is comprehensive and covers various topics ranging from the history of graffiti to the current trends and issues associated with street art. Drawing from the catalogue, we put together a list of favorites (in no particular order) for you to check out.

The History of American Graffiti
Written by Roger Gastman and Caleb Neelon, “The History of American Graffiti” is widely considered the distinctive source on the subject. With over one thousand photographs, this 400-page book follows the movement’s rise from the early days of bombing subway cars in Philadelphia and New York City to its evolution into a legitimate form of artistic expression. In addition to epicenters like NYC and Los Angeles, it considers Wisconsin, Denver, Nashville, Washington D.C., unsuspecting areas where graffiti culture flourished. Profiles of prominent figures as well as lesser-known trailblazers reveal insider-stories and individual views and experiences. Clear a sizable spot on your bookshelf for this one. 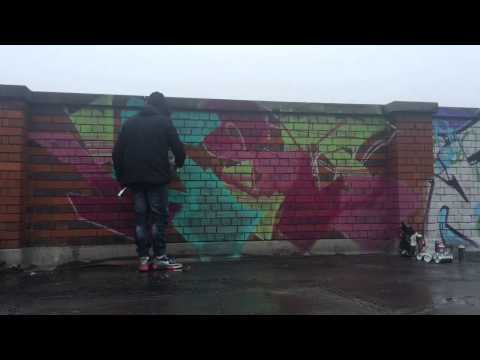 Exit Through the Gift Shop
There’s so much we can say about Banksy’s documentary (mockumentary?) film “Exit Through the Gift Shop,” which follows Theirry Guetta, a French filmmaker whose obsession with street art leads him to pursue his own career as a street artist under the nom de guerre Mr. Brainwash. In his quest for fame and fortune, Guetta rubs shoulders with just about everyone – Bansky, Shepard Fairy, Invader, and many others. Funny and thought provoking, the film addresses the hype, enigmatic nature, and commodification, which surrounds the underground art movement and its major players. “Exit Through the Gift Shop” received critical praise and was nominated for an Academy Award. This is one of those films that reveals more of its self with every watch.

The film is definitely worth watching, although it's padded with some fluff to make it feature length. If they took out a half hour of fluff and replaced it with more scientific facts and details, that would have been money better spent than all the fancy graphics in the movie. But, people watch movies like this to be entertained, so maybe I'm.

Style Wars
Released in 1983 by director Tony Silver and producer Henry Chalfant, “Style Wars” is the first documentary film to consider the vibrant culture of Hip-Hop through graffiti, rapping, and breakdancing. Footage captures the raw, urban landscape of New York City during the 80s when subway cars and city buildings doubled as canvases for graffiti writers. The main protagonists are teenage boys, some even younger who formed a creative coalition that was often at odds with police, the NYC transit authority, and NYC mayor Edward Koch. Today, “Style Wars” is considered a historical artifact representing the golden age of graffiti.

Beautiful Losers
Directed by Aaron Rose and Joshua Leonard, the documentary “Beautiful Losers” focuses on a collective of underground artists who emerged during the 1990s. Many came from unconventional backgrounds – graffiti, skateboarding, punk rock, and hip-hop while some had formal art training. What these artists do have in common is a do-it-yourself approach to art making, which defies contemporary art’s rigid systems of exhibition and value. Artist profiles include Shepard Fairey, Barry McGee, Stephen ‘Espo’ Powers, Clare Rojas, Cheryl Duncan, and Mike Mills.

The Faith of Graffiti
Two-time Pulitzer Prize winning author Norman Mailer wrote the essay “The Faith of Graffiti” in 1974 when the movement was just taking off in New York City. Understanding graffiti as art, Mailer was one of the first to evaluate its cultural and social significance. Teenage vandals are elevated to urban revolutionaries fighting for a new kind of art. Now considered a classic, the essay is accompanied by Jon Naar’s stunning photographs. The images served as a catalogue showing the different styles and trends observed of the time.

Subway Art
Martha Cooper and Henry Chalfant’s acclaimed book “Subway Art” is an intimate portrait of NYC’s graffiti scene during the 70s and 80s. Here is a special case when you absolutely should judge a book by its cover (we like the first edition’s best). Armed with a spray can, an urban youth straddles two subway cars in an attempt to get his name up. Sensed in this collection of photographs of NYC’s subway system is a raw energy and creative force like never before. The book focuses on burners – whole car or top-to-bottom pieces, and it’s safe to say that most of the featured pieces no longer exists. Thus, these images stand in as cultural icons representing the first generation of graffiti and its pioneers.

The World Atlas of Graffiti and Street Art
Published in 2013, “The World Atlas of Graffiti and Street Art” chronicles the movement as it exists in different areas throughout the world. Written by Rafael Schacter, it is organized geographically by city and country, spotlighting today’s most important artists – Os Gemeos in Brazil, Anthony Lister in Australia, Banksy in London, and JR in Paris. Attention is paid to “commissioned” city artworks and their connections with the urban environment, city residents, and local culture. This book offers an insightful view of the rich and dynamic fabric that makes up the global graffiti and street art community.

Tresspass: A History of Uncommissioned Urban Art
In 2001, Marc and Sara Schiller started Wooster Collective, a pioneering website devoted to documenting street art. Working with author Carlo McCormick, they curated “Tresspass,” a comprehensive book offering a historical overview of street art’s rise to one of contemporary art’s most significant movements. It covers four generation of artists, examining how particular techniques, tendencies and styles defy art paradigms and the law. Another great aspect about Tresspass its acknowledgement of the connection between more institutionalized artists Jenny Holzer, Gordon Matta-Clarke and Keith Haring and Blu, Banksy, and Faile – all were/are producing unsanctioned art in urban spaces.

The Warriors
Read a plot synopsis of Walter Hill’s cult-cult classic “The Warriors,” and you may think “what does this film have to do with graffiti and street art?” Based on Sol Yurick’s novel of the same name, the film’ story is about gang rivalries in New York City in 1979. Remember, graffiti was flourishing at time. So as scenes move from Pelham Bay Park to Coney Island to the Bronx, often by subway car, we get to see work by Iz the Wiz, Spear, Kado, and Nic 707.

If these sources suggest anything, it’s that the narrative of graffiti and street art is complex, deep, and still unfolding. Today, application of labels and categorization is impossible, because artists operate simultaneously inside and outside the system. We set out to make a starter list of books and films, which addresses the movement’s historical origins as well as today’s trends and impulses. And if you have a favorite, we’d loved to hear about it.